Directions: If you are in Kolkata take any bus going to South Kolkata and drop in Lake Road. It is about 26 kilometers from Netaji Subhas Chandra Bose Airport and 11 kilometers from Sealdah and Howrah Station. Recommended visit in the early morning and the dusk time.

Life needs oxygen to live best. So an urban dweller needs to get oxygen from serene ambiance of the lake. The city development authorities in Kolkata in bygone era is responsible to make this artificial lake of 192 acres of land, flanked by Southern Avenue to the North, Rashbehari Avenue to the West, Dhakuria to the East and the Kolkata Railway Tracks to the south. 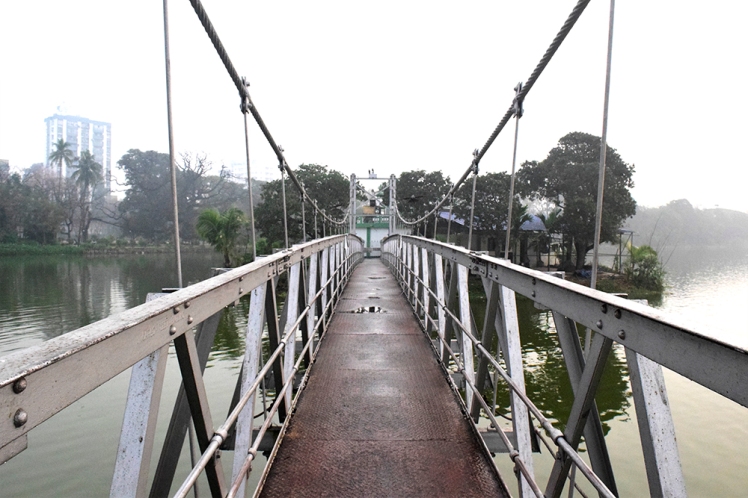 Now it is named as Rabindra Sarobar. In the early 1920s Calcutta Improvement Trust made this lake in the midst of marshy jungles. At that time, Britons installed three cannons, which is believed that these cannons are used by Siraj-ud-daullah during the siege of Calcutta (1756-1757).  In the year 1958, Dhakuria Lake was developed with sitting arrangements, children’s park, and cricket coaching center.

Today Rabindra Sarobar and its surrounding areas are one of the most popular recreational areas in Kolkata. 73 acres are covered by water, while shrubs and trees, some of which are more than 100 years old, occupy the rest of the area.

Truly, it is an oxygen spot for city dwellers of Kolkata. Morning walkers, laughing clubs, spiritual grouping and political gossips are the common things at this lake in the morning. Lazy passersby, loving making of teenage couples, weird chaiwala, art students and tired salesmen – all elements are near Rabindra Sarobar.  Enjoying the fresh air is main USP. Many visit the sunrise to offer their prayers to the sun. During the day, it is visited by families on a picnic, tourists, young lovers and joggers and with the evening it slowly turns into lover’s point.

Rabindra Sarobar Stadium, Lake Kali Bari, Birla Art Gallery, Nazrul Mancha, Durga Museum, Japanese Buddhist Temple and an inland lake all are the landmarks of this area. In the evening, rowing and boating are available for the lovers. A light and sound show is now organized by Government of West Bengal showcasing the heritages of Bengal.