It was on 26th January 2014. I decided to go Jatar Deul or jatar Deula or Jotar Deul (Jota means the hair stiffed head of Lord Shiva) after visiting some of the websites related to Bengal’s ruined temples. Jatar deul, to me one of the toughest task to go, because there is no easily accessibility to reach Jatar Deul from Kolkata. If you have back bone disease, you need a personal cab to take this attempt.

I boarded a 5: 15 am local train to Jaynagar (South 24 Parganas) from Ballygaunge Station. After reaching Jaynagar, I took some holiday late kachoris from shop. In the winters, Joynagar is famous for Nolen Gurer moas. Then at 7 :30 morning I took one trekker to go Dhaki Stop. It is hardly one and half hour ridiculous and tire-some journey to Dhaki. Clocked at 9: 45, after reaching Dhaki, I went a five minutes walk to Moni River. Now to reach Jatar Deul, I need to cross Moni River, supposed one of the small distributaries of Ganges. The ferry around Moni River costs Rs 2 for both ups and down. After reaching the shore, fully Bangladeshi Style decorated “vano” electric rickshaw took me to Jatar Deul after half and hour. I think this is the shortest time to reach there. 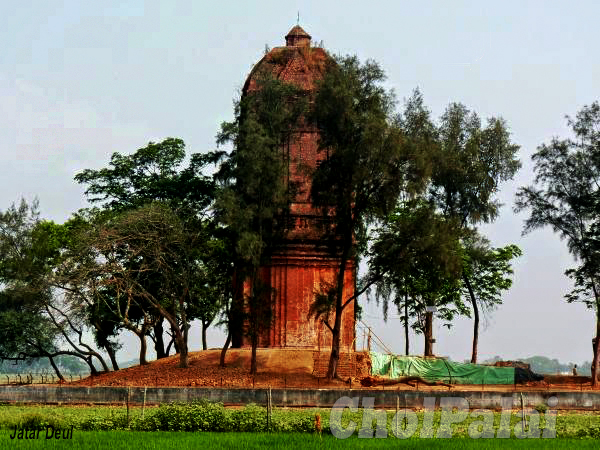 In the middle of the nineteenth century, the British land surveyors stumbled upon a towering brick structure in the midst of the Mangorve Sundarban Forest near Kaikhali. The nature around Jatar Deul and the Moni River is awesome. Calm and serene atmosphere, cool breeze, and ice cold sugar cane juice, three storied mud-hut and simply the small rural simple life all made to stay there for long.  But when I found some picnic gores come and pollute this place, I think it is the better time to back from the dreams.

The structure of this old tower of Jatar Deula was surrounded with dense forest and was itself covered with thick vegetation. So who constructed the temple in the heart of one of the densest forest in the world? What was the purpose of construction? When was it constructed? Was this part of a remarkable civilization that once flourished in Southern Bengal which is ion the dense mangrove forest? Although some of the British and Indian historians are unable to come up with any concrete conclusion, they have shared their opinions. But it is quite unbelievable to say that which we now call as “Gram-Ganja”, once it was full proofed and well planned civilized city like Bawali.

Satishchandra Mitra has described the temple as a watch tower of Pratapaditya. Kashinath Dikshit initially described Jatar Deul as a epitome of Mughal architecture but later on described it as an Oriya architecture dating back to days of Lingaraj temple and Konark temple of Odisha. In 1914 the then head of the Eastern Region of Archaeological Survey of India, J F Blackistone initially described the structure as “timeless” but later on said that the structure dated back to Pala or Sena era of about 1000 AD.

A copper plate found near Jatar Deul in the year 1875 suggests that Raja Joychandra constructed the temple in 975 AD. The plate has long been missing, but its presence has been confirmed by some eminent historians.

Jatar Deul doesn’t follow the traditional Bengal style of Chala or Ratna, or the terracotta style of Bengali temple architecture. But, the architecture follows the Oriya style of towering spire, ‘Deul’. The temple is long abandoned but the locals believe that it once housed the deity of matted haired (Jatadhari) Shiva and hence the temple got its name. 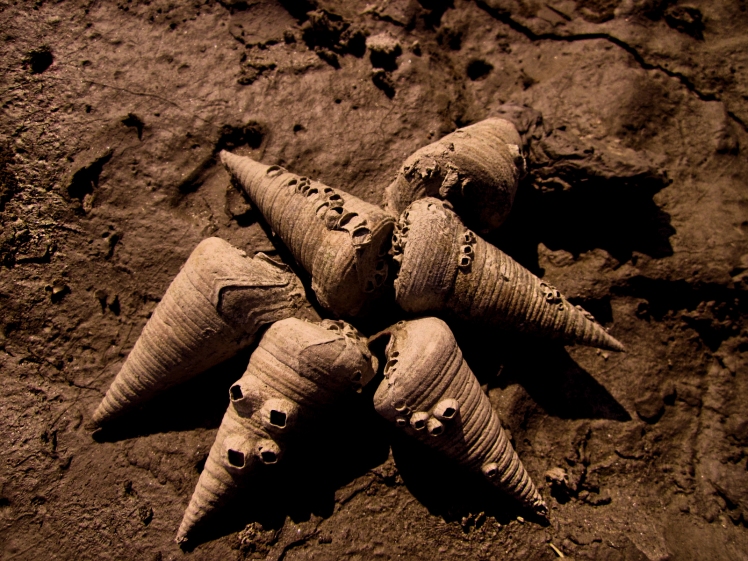 The base of Jatar Deul is a square measuring 25.5 feet. The inner sanctum of Jatar Deul is also a square of side 10 feet 8 inches and is located 4 feet 3 inches below ground level. The inner sanctum contains five kulingis. The spire follows the corbelling method (bricks arranged in steps) but the exact height of the temple cannot be found as the original spire was damaged by an Englishman who was searching for some hidden treasure. The spire has been rebuilt but sadly it doesn’t match the grace and beauty of its former counterpart. The walls of the temple were intricately decorated with decorative bricks, but sadly most of it is lost due to unplanned reconstruction.

2 thoughts on “Standing near the Tower of Silent History : Jatar Deul”